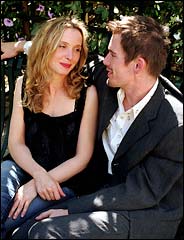 My one sentence review: “A romantic movie where they spend most of the time talking about how romance is bullshit,” to which Dan pointed out that there were too many serious complications, left thoroughly intact and undealt with, for it to be horribly romantic. But it is, and the romance and the tension are both what make the film so great and at the same time a terribly-timed piece of emotional familiarity for me, too real to be ignored, a so-subtly-idealized picture of human life. {This is the part where you take Jesse’s words “Time is a lie” to heart, and imagine most of a day passing between these sentences, as well as quite a bit of the depression that fueled the former, a short bout brought on by many things I shant bore you with here.} I liked the questions the movie brought up; I hated the answers it only implied. Q&A’s about love, a subject with which I had so much experience with this year prior, I feel like maybe I won’t be able to again for some time.

From the New York Times’ review:<blockquote>…though it is sometimes maddening, the movie’s prodigious verbiage is also enthralling, precisely because of its casual disregard for the usual imperatives of screenwriting.

…Can’t they just say what they mean? Can you? Language, after all, is not just about points and meanings. It is a medium of communication, yes, but also of avoidance, misdirection, self-protection and plain confusion, all of which are among the themes of this movie, which captures a deep truth seldom acknowledged on screen or in books: people often talk because they have nothing to say.

…I found myself cringing from time to time …when Celine scrunched up her face and cooed at her pet cat. But these two were never meant to be perfectly likable; that is part of what makes them perfect for each other. …it is their indifference to the audience that makes them so fascinating.

They have no interest in us, which is why we…are so interested in them.</blockquote>rotten tomatoes page for the film

official site for the film